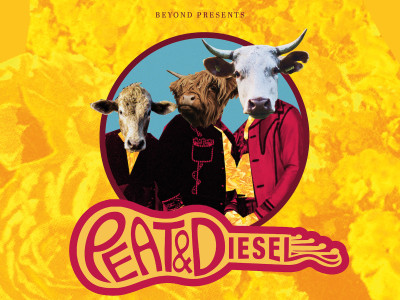 Rescheduled dates for Peat & Diesel. Due to COVID-19 the promotor has confirmed Peat & Diesel has been rescheduled to Sunday 14th November 2021. All tickets remain valid and if you cannot make the new date refunds are available for one month

The story began when three Stornoway Cove’s (Innes, Uilly and Boydie) met up in the house to have the craic on a Saturday night playing some music with just the dog and cat watching. After a few tunes getting thrown across the room Boydie started muttering a few sentences. As he is a man of few words no attention was really given to him until he shouted “Quick, line me out!” Not a second to spare, a set of old broken headphones were cable tied to a guitar stand and this back fed the muttering into a crackly guitar amp and out came a few cobwebs followed shortly after with a second that nobody had ever heard before. What came next was five gallons of lyrics, verse after verse, song after song – PEAT & DIESEL WAS BORN!!

The songs wont make much sense to the average person, but the person behind the lyrics isn’t your average man so if you have a listen and you can relate to it you are a special breed!

The band has gone from strength to strength with the support we are receiving from our fans, its you lot that have got us this far, we weren’t even planning to leave the house. This crazy train ride wouldn’t be possible if we were left alone to do the driving so we would like to thank everyone who has given us the ‘diesel’ for the road, the ‘crash barriers’ for the corners, and the steering wheel for keeping her in line.